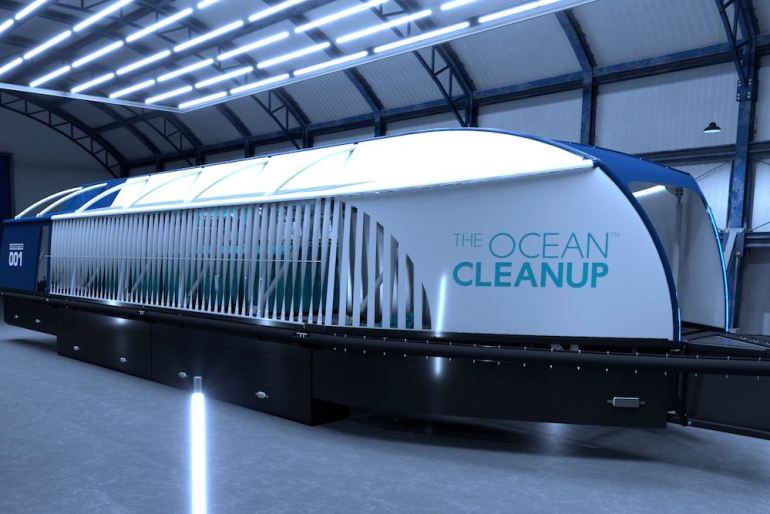 After revealing their new solution to river plastic pollution last autumn, The Ocean Cleanup has continued the process of ridding the world’s waters of trash. The brand-new Interceptor has already made its way to Indonesia, Malaysia and Vietnam. This week the organization sent its fourth Interceptor to the Rio Ozama in the Dominican Republic to rid the river’s waters of plastic.

The Interceptor is a fully autonomous, solar-powered machine that can extract up to 100 metric tonnes of trash from rivers daily. Anchored to the river bed, it follows the natural flow of the river. Via a long barrier, which feeds the trash to the machine’s mouth and onto a conveyor belt, the waste is collected in six separate bins. Once almost full, the Interceptor sends out a message, after which local operators can empty the bins.

As part of its mission to rid the world’s oceans of plastic, The Ocean Cleanup has already made headlines after developing a passive cleanup system relying on the ocean’s current and wind patterns. The engineers expect that system to be able to halve the amount of plastic in the Great Pacific Garbage Patch every five years.

But to have a sustained impact, addressing rivers is key. “To truly rid the oceans of plastic, we need to both clean up the legacy and close the tap, preventing more plastic from reaching the oceans in the first place,” says Boyan Slat, the organization’s founder and CEO. “Combining our ocean cleanup technology with the Interceptor, the solutions now exist to address both sides of the equation.”

Related:  A subscription service for cleaner and healthier water

The Ocean Cleanup found that just 1%, or 1,000 of the world’s rivers combined are the source of 80% of trash ending up in the oceans. The organization’s presents is extensive research results in an interactive map on their website.

The Interceptor makes sense from an economic perspective as well, The Ocean Cleanup argues. The technology used is claimed to have the lowest cost per kilogram of plastic collected.

“Together with Deloitte we calculated the cost of not intercepting plastic in rivers,” says Slat. After mapping the worldwide impacts on industries such as tourism and fisheries, the team found that investing in interceptors is cheaper than letting the plastic problem continue. “This means that every day countries are not investing in intercepting plastic in rivers, they are losing money.”

According to Slat, the time has come to scale up the deployment of the Interceptor. “Our goal is to tackle those 1,000 rivers in five years time.” Besides the first four Interceptors, plans are being developed to start deploying the Interceptor in Thailand and the United States.