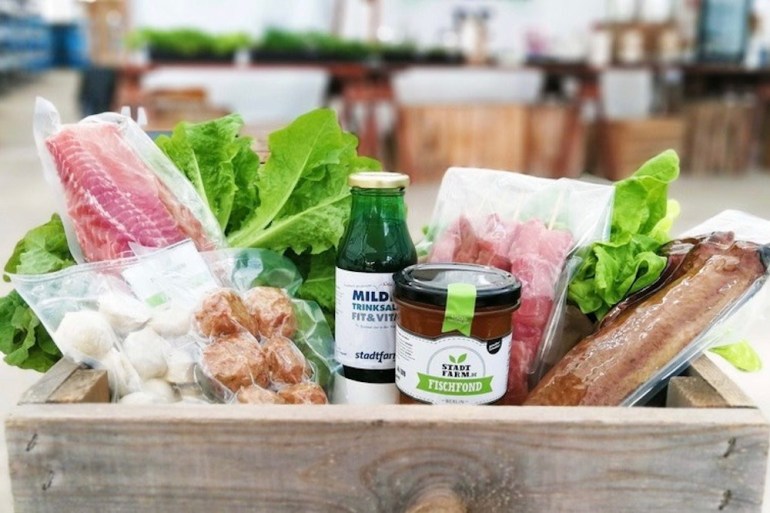 Fresh fish and vegetables, grown locally and at a fraction of the environmental impact of their conventional counterparts. The people at Stadtfarm envision a future in which this is the rule, rather than the exception. The Berlin-based company is scaling up through a crowdfunding campaign, and has exceeded its target investment well before the investment round closes.

Founded in 2015, Stadtfarm launched its first urban farm in 2017 in response to modern agriculture’s environmental impact. Their proprietary technology, called aqua terra ponics, enables the production of fish alongside vegetables in a balanced closed-loop water system.

The system’s resource efficiency stands in stark contrast to the high energy intensity and land use of modern agriculture. Local production and sales minimize food miles and the associated greenhouse gas emissions by as much as 80%, while the applied technology makes the system free of pesticides and antibiotics.

The company’s first commercial farm produces 30 tonnes of vegetables and 50 tonnes of fish, feeding a few hundred people throughout the year. A second farm is planned to be developed on the premises of energy company Vattenfall.

“Historically, the excess heat of power plants such as Vattenfall’s was used to operate greenhouses,” says Anne-Kathrin Kuhlemann, Stadfarm’s CEO and founder. “We’re bringing back that history and combining it with modern, cutting-edge technologies.”

The target funding of 350 thousand euros will enable the realization of this project. An additional 700 thousand euro loan should fund a 24/7 store, kickstart the production of pet food made of fish residues, and automate a number of kitchen processes. By building two or three more production sites, the company hopes to prove that it can grow effectively.

Stadtfarm mainly provides fresh produce to restaurants, while selling about a quarter of its products to individual customers through its physical and online shop. After sixteen months of business, the company reported a positive gross profit.

Valued at around five million euros, the firm is currently introducing exclusively-designed robots to automate the production process. Through artificial intelligence, these will monitor for pests and recognize weak plants to prevent outbreaks, while providing fungi-killing UV-light at night.

Eventually, the company wants robots to do even more in the production process, such as planting herbs and lettuce.