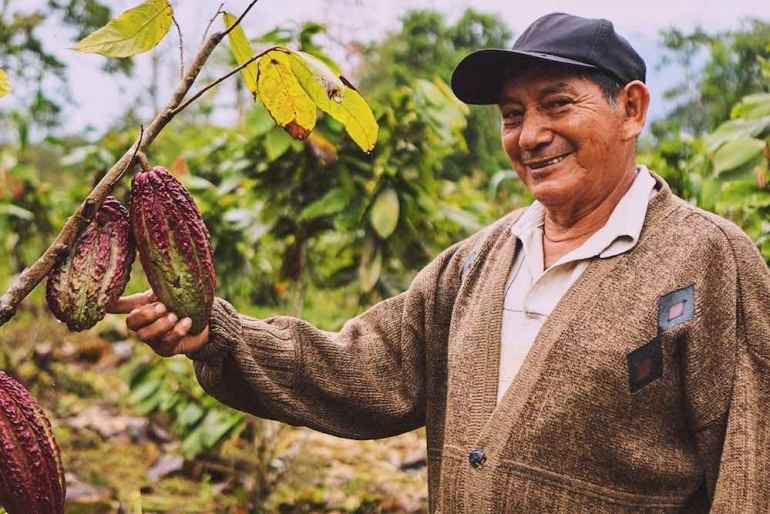 Image: The Other Bar

Cocoa farmers earn just three percent of the total value of cocoa used for chocolate manufacturing, leaving most of them below a living income. A collaboration between the UN Development Program and the FairChain Foundation is seeking to change this.

Through a new type of chocolate bar, they are putting the consumer in charge of how its profits are distributed. The chocolate bar, which comes in various flavors, is produced in Ecuador from organic cocoa.

Customers can scan the token that comes with it to invest in a quarter of a cocoa tree, directly helping a farmer increase their yield and income. Alternatively, buyers can decide to use the token to get a discount on their next purchase.

The FairChain Foundation, which was founded in 2012, calls it an experiment in radical equality. Its initiator Guido van Staveren is also the founder of Moyee Coffee, the Dutch-Ethiopian coffee brand that strives for a better profit distribution among parties in the coffee supply chain.

Besides a 20% premium for farmers, the company locates most of the value-added processes, such as roasting and packaging, in Ethiopia, providing the its economy with 300% more money.

After his appearance on a podcast, Van Staveren teamed up with the UNDP to apply the FairChain ideas to the Ecuadorian cocoa sector. The Other Bar connects consumers with local cocoa farmers and producers, changing the way in which global business is done.

In a video, the FairChain Foundation points out that companies spend over $770 billion per year on marketing, while just a quarter of that money could end global poverty.

The QR-code that comes with each bar not only allows consumers to find out how much the farmer of their cocoa was paid, but also discover the exact location of the new cocoa tree they invest in. So far, more than two-thirds of the initial 26,000 bars have been sold.