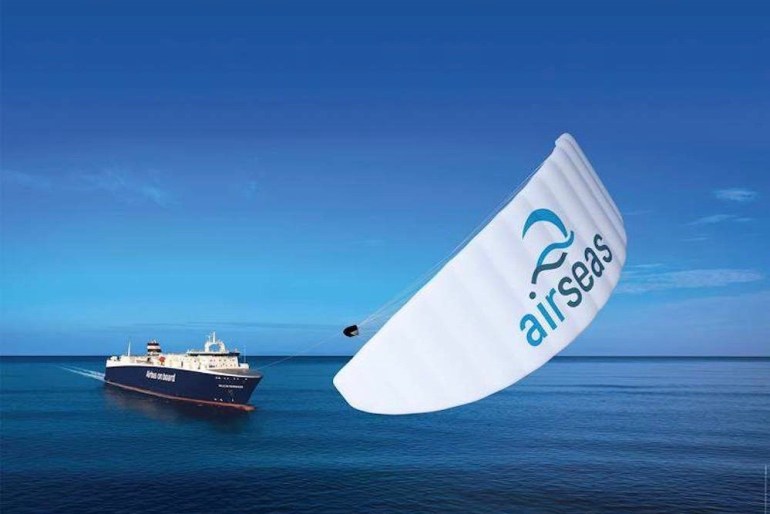 The image seems almost fictional: a giant kite, towing a five-gigaton commercial ship through the ocean. But a small Toulouse-based company is pulling it off, providing the shipping industry with a much-needed solution for its high costs and environmental impact.

Airseas, a spin-off of aerospace company Airbus, developed the Seawing, an autonomous parafoil kite to tow cargo ships. Via a simple on/off switch, the vessel’s captain can launch or recover the autonomous kite, and harness the wind to continue its course with up to a 20% decrease in fuel use and associated emissions.

The Seawing is an important step towards reaching the aim of the International Maritime Organization to realize a carbon dioxide emissions cut of 40% by 2030, as well as reducing other emissions such as nitrogen oxide and particulate matter. The 28,000 ships navigating the seas that weigh more than 5,000 gigaton emit about 2.7% of global CO2 emissions. As fuel constitutes up to 50% of total operating costs, putting the wind to work is an appealing plan.

In June of 2019, the leading Japanese transport company K Line announced a pilot to equip one of their ships with a Seawing, with a potential 50 more in the future. A year earlier, Airbus was the first to order the kite for its cargo ship and from 2021, the Seawing will be available to large shipowners. Ultimately, Airseas’ aim is to equip 15% of the world’s fleet with the system.

Besides transport purposes, kites can also be used to generate electricity, as Kite Power Systems has proved. The Scotland-based engineering company has been developing its alternative to wind turbines since 2011, aiming at a solution that is cheaper and uses 85% less material.

PreviousPrevious post: France is going to address plastic microfibers from washing machines
NextNext post:Hyper Poland is raising new capital in a series B investment round